The marks of time III


In an earlier post I reported that my artwork for St Marys Loch Shinglehook had been damaged by fire.

Shinglehook was conceived as a 'place to wait for a deep time event' (the arrival of an alluvial bridge that is growing across the loch - a process that will take more than 10,000 years) 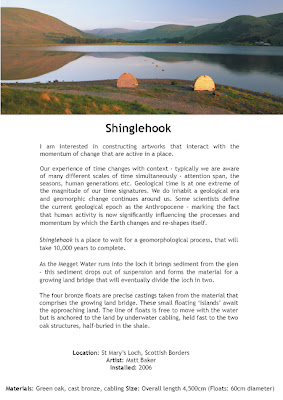 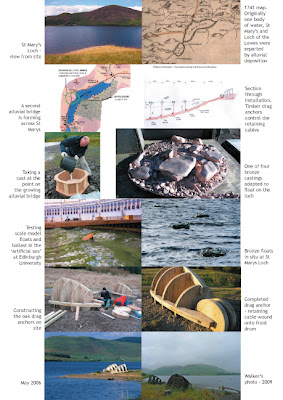 I wanted the work to have the character of a being a 'scientific experiment' rather than a 'precious' artwork...I was committed to idea that it needed to take its chances in the environment and, as I wrote previously, to bear the scars of time.
As such Shinglehook is reliant on the 'kindness of strangers' for its survival (Dr Bean who put out the fire was one such kind stranger). I was then very surprised (and delighted) to get an email from Keith Robeson of Scottish Borders Council offering to help repair the artwork.
I thought long and hard about how to approach this and worked with my good friend and colleague Alex Rigg. In the end I decided that we should not try to restore the work in the manner of an art conservator but rather do what was necessary to maintain the integrity of the experiment ie stop the structure deteriorating further and make it safe for the public. For me this was an committment to remaining true to the idea that Shinglehook would need to be maintained by others if it were to survive any distance into the future....as such my aesthetic judgement must be replaced by a more collective vision. Alex and I discussed the principles of the repair and then he carried them out in detail (ably assisted by the maritime skills of Mark Zygadlo)

I also asked Mark and Alex to check on the condition of the bronze floats and their anchor cables. I was delighted to discover that these have been weathering very well:
Posted by _mattbaker at 15:37

Email ThisBlogThis!Share to TwitterShare to FacebookShare to Pinterest
Labels: The marks of time

Arist-led projects I am involved with