The current ‘Great Creative Scotland Stooshie’ both represents 1) a golden opportunity for the arts and a 2) a gaping elephant trap.
The whole world is looking for new ways of doing things – smart collaborative ways of working. In many of the areas I am working in at the moment the arts and artists are leading the way in genuinely groundbreaking initiatives. What we need to be doing in relation to Creative Scotland is bringing to the table imaginative strategies and attitudes that confirm the status of the arts as one of the guiding lights that can lead and inspire others.
There is a need and an opportunity for the arts to use all the brilliant tools at our disposal to first create and then inhabit an arena of inclusive debate about how the arts should be positioned in a modern, forward-looking Scotland. This will include debate about how we support the creation of original work….how the arts take their place as a tool for education and wellbeing…..how we decide on work that requires subsidy to reach an audience and what society can expect back for that support. In short, the whole kit and caboodle of a new contract between artists and the nation.
What we are risking at the moment is the arts ending up as a ‘problem’ that gets solved according to the bankrupt logic of adversarial conflict. The increasingly likely outcome is that someone will be given the task of ‘sorting’ the arts….there will be some symbolic blood-letting on both sides and then we will be consigned back to society’s long grass – our credibility as potential opinion-formers and beacons-of-hope damaged rather than enhanced.
To be slightly ‘apart’ or ‘outside’ is a crucial part of the artistic make-up….. it is important to how we function. How we manage this in relation to the rest of society is the key to progression at this point of time. With that ‘outsider’ mentality comes a questioning relationship to ‘authority’……this is an easy button to press with most of us – it can lead to spectacularly positive results it can also lead down blind alleys of self-destruction. It appears to me that the cultural media is hugely enjoying its moment in the sun on the front pages – this is further pushing that ‘outsider’ button in many artists…..we like nothing better than a just cause!!! 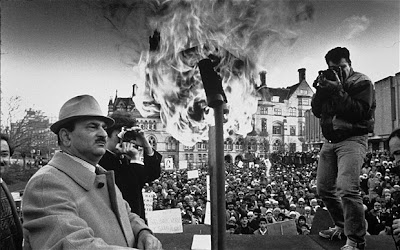 But what is the cause and is it just? I believe it is true that Creative Scotland arrived with reforming zeal and a shiny new broom…..it is true that often this was not a comfortable prospect…particularly when the broom was wielded, at times with a macho vigour that seemed to have little regard or understanding of what was in its arc. But for me, the much discussed ‘business-speak’ actually seemed more dated at times than really threatening.
But lets look at our options….do we really want to throw the whole thing over and demand a fresh start….this just ain’t gonna happen. Lets not forget (because the politicians won’t) just how long this all took to set up in the first place. What we have in Creative Scotland is an embryonic National Institute for Culture – what we, as artists, need to do now is embrace the possibility of this and help it reach its undoubted potential – to do that we need positive strategies more than we need barricades.
In a microcosmic form the arts in SouthWest Scotland has been going through a similar process to the whole country. Following the demise of DGArts the arts sector gathered itself together and began a process of discussion with other partners in the region. The net result of this activity is a prototype structure with regional arts hubs feeding into a central cross-disciplinary body. This central body has devolved power from the local authority to commission projects, develop strategy and form partnerships. The key characteristic of the overall approach is the presence of practitioners on an equal footing with council officers and agencies such as NHS, SNH, Tourism, Education and Creative Scotland.
Could something similar be an outcome of re-configuring Creative Scotland itself – yes it certainly could…but not if we allow ourselves to be pushed into a adversarial corner.
Building bridges instead of burning them might not make headlines but is the best hope for the future of the arts and the country.
Posted by _mattbaker at 17:55

Arist-led projects I am involved with